Gluconeogenesis plays an important role in supplying glucose from the conversion of non carbohydrate compounds such as lactate, pyruvate, glycerol, glucogenic amino acids etc in prolonged fasting or starvation. Liver glycogen supply the glucose only for 10 to 18 hours fasting. Liver and kidney are the major organ where gluconeogenesis occurs. Approximately 90% of the gluconeogenesis occurs in liver in short term fasting (overnight fasting). While, kidney is is the main glucose supplier in prolong fasting.

Failure of gluconeogenesis in human can lead to hypoglycemic and death. Hypoglycemia causes low glucose supply to brain. It causes brain dysfunction and eventually coma.

Gluconeogenesis is not a simple reverse reactions of glycolysis because overall equilibrium of glycolysis favors the formation of pyruvate.

Examples of gluconeogenic precursors are as below: 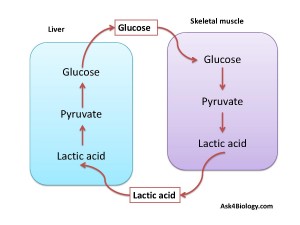