Class I MHC genes are at the locus of A, B and C at the chromosome 6 in humans. Genes encode glycoproteins expressed on most nucleated cells.

Class II MHC genes are at the loci DP, DQ and DR at chromosome 6 in humans.These genes encode glycoproteins expressed on mainly on antigen presenting cells (APCs) such as macrophages, B cells and dendritic cells. The peptide processed by APCs will be expressed and presented on class II MHC molecules.

Genes are at loci C4, C2 and BF at chromosome 6 in humans. They encode other immune proteins such as components in complement system, inflammatory cytokines, including tumor necrosis factor (TNF) and heat-shock proteins.

Class I and Class II MHC

Class I and Class II have the similarity where both process antigens.

Structure of Class I and Class II MHC

Both are membrane bound glycoproteins. Class I MHC have 45-kilodalton (kDa) α chain and 12-kDa β2-microglobulin molecule. α and β are associated non covalently. The α  chain is anchored inside the plasma membrane by its hydrophobic transmembrane segment and hydrophilic cytoplasmic tail. α chain make up α1, α2 and α3 as external domains. Each contains roughly 90 amino acids. Transmembrane is make up by about 25 hydrophobic amino acids followed by a short stretch of charged (hydrophilic) amino acids. β2-microglobulin does not have transmembrane segment. α1 and α2 form peptide binding cleft where the processed peptide is bound and expressed. 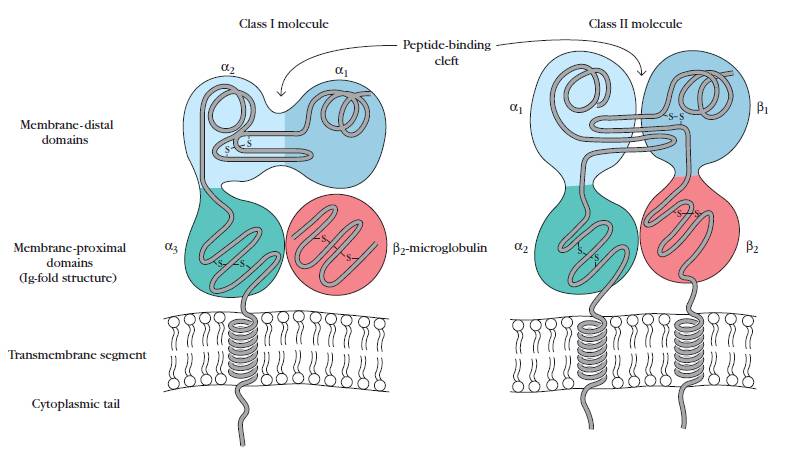