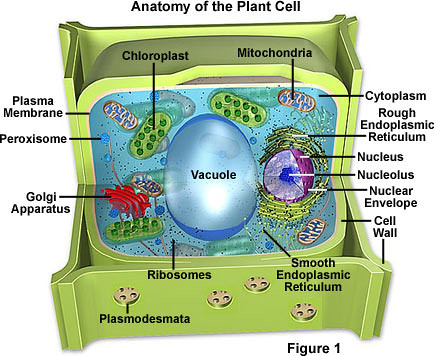 Plant cell has organelles called plastids. The most important type of plastid is the chloroplast where distinct feature for plant cell. Many plant cells have a large central vacuole and some have small vacuole.

Chloroplast is biconvex discs. The measurement is 3 to 10?m diameter. It has double membrane system comprises of phospholipids. Inside chloroplast, there is another membranous system in the form of flattened, interconnected sacs which called thylakoids. Thylakoids are grouped ina stack, called granum (plural,grana). The fluid surrounding thylakoids are called stroma which contain chloroplast DNA, ribosomes and enzymes.  The membranes of the chloroplast divide the chloroplast space into three compartments: the intermembrane space, the stroma, and the thylakoid space. Central vacuole, membrane-bounded vesicle is generally found in mature plant cell.  It is derived from endoplasmic reticulum and Golgi apparatus. Vacuolar membrane is selective in transporting solutes. Hence, the solution inside the central vacuole, called cell sap, differs in composition from the cytoplasm. It reserves important organic compounds, such as the proteins, inorganic ions, such as potassium and chloride. It is also a disposal sites for metabolic by-products. Red and blue pigments are also found in vacuole petal cell to attract pollinating insects. Some vacuoles have poisonous substances inside to protect them from predators.

The vacuole has role in growth where it can absorb water and allow the cell to expand larger with a minimal investment in new cytoplasm.

Cell wall is the cover after plasma membrane of plant cell. It is think and range 0.1?m to several micrometers. It is made up by cellulose. The wall protects the plant cell, maintains its shape, and prevents excessive uptake of water.